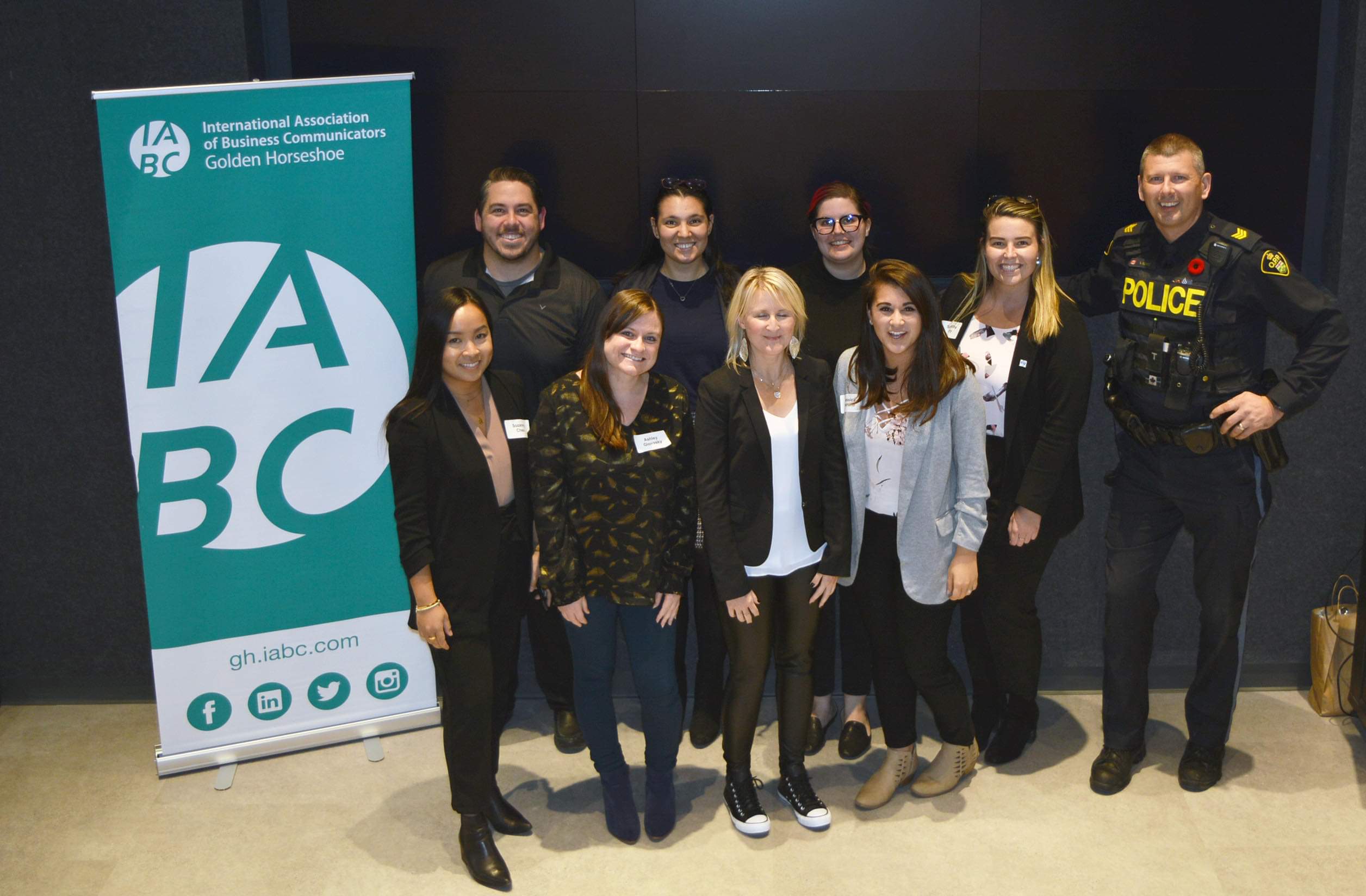 On November 7, Sergeant Kerry Schmidt from the Ontario Provincial Police came to speak at an IABC Golden Horseshoe event held at the Staples STUDIO, a new co-working facility from the Staples Business Center in Oakville.

Historically, law enforcement services were very private. Information that was available to the public was quite limited as anything that was shared could potentially be a liability or risk. The more you say, the more you’re exposed.

Of course, with the improvements in technology, this has all changed. We now live in a society where we need to know everything, all the time. The more you hide, the more you are scrutinized. So, how does the knowledge era impact law enforcement services?

Sergeant Kerry Schmidt of the Highway Safety Division of the Ontario Provincial Police has spent the last five of his 20 years in law enforcement in media relations. His activity on Twitter has earned him the nickname “The Social Sergeant,” as he keeps the public informed of traffic conditions, obstructions and infractions. He is also seen and heard quite often throughout the GTA, updating the media on serious collisions and speaking about traffic safety.

During his presentation he shared his experiences and lessons learned from working with social media and media personnel. He called himself a “one man band” that has no formal media training and has been learning as he goes. Kerry’s career and experience shows that social media is a powerful storytelling tool that can be used for the public good.

Creating messages and working as a team

With a powerful visual of training police officers walking through fire in full riot gear, Kerry said that with media relations, you are walking through the fire every day. Sometimes you get burned and sometimes you make it through unscathed. Regardless of how it appears; you need to know that people on your team have your back and that you will come out the other side looking like a unified team.

Kerry drew on his experience with the type of language used to describe situations. He showed a video of a large crash on Halloween night in 2017, involving two fuel tankers and multiple other vehicles. He said that at the time, on social media, he used the words “apocalyptic” and  “Armageddon” to describe the crash, which he now acknowledges were explosive words to use. ‘“Trying to collect our thoughts and have private discussions with the trucking industry and be able to come to some sort of consensus, understanding that we all have a common goal of traffic safety,” said Kerry. “What does that look like for us as we move forward?”


Regardless of how it appears; you need to know that people on your team have your back …

He said this didn’t invoke any confidence in the trucking industry and sparked fear in the public. Kerry said the way the messages were framed made it seem like trucks were the problem. He noted that following that incident, the OPP had to do some damage control and stress the fact that the message the team was trying to get across was that this traffic incident, like so many others, are preventable.

Sergeant Kerry Schmidt demonstrated how his engagement with social media has helped tell stories. He showed a video that since its posting has gone viral of stunt drivers on Highway 409. He noted that this is now a criminal investigation and that following his repost of the video, he received a lot of tips regarding who may be responsible.

Kerry said that technology has allowed for timeliness. Often when he is speaking to the media or creating his own videos, Kerry sets up his phone wherever he is and starts filming. This allows him to speak about incidents live. The information is available immediately, unlike the past, when newscasts took more time to film and broadcast.

Videos and social media tid bits are also good for our attention spans, said Kerry. He said that people are far more likely to watch a video than they are to read a media release. You have your audience’s attention for about three seconds, so you need to release multimedia content in addition to written content in order to keep your audience interested.

Social media, however, said Kerry, comes with a downfall. He stressed that once you post something, even if you take it down, you can’t take it back. Things like traffic incidents or other “viral” videos are picked up by multiple media outlets, who use the footage for their own purposes. “Once it’s out there, you lose all control over it,” said Kerry.


“Know your content, know your material, know your audience. The more authentic you are, the more real you are and available you are to your audience, you’re going to be well-received.”

This is just one of the events that is part of IABC Golden Horseshoe’s Speakers Series. Make sure you’re following us on social media to see upcoming events in your community!